skip to main | skip to sidebar

Keep warm and save money with renewable energy!

Looks like a good idea happening on Vinalhaven by using the excess electricity for heating houses and saving money.  See http://workingwaterfront.com/articles/Excess-wind-energy-keeps-islanders-warm-during-pilot-project/13790/ for a summary.

Finally, the first in-water wind turbines were approved. The Department of the Interior approved the plan for Cape Wind, the wind farm in Nantucket Sound, to move forward. See http://www.nytimes.com/2010/04/29/science/earth/29wind.html?ref=science.
Posted by Krem at 3:12 PM No comments: 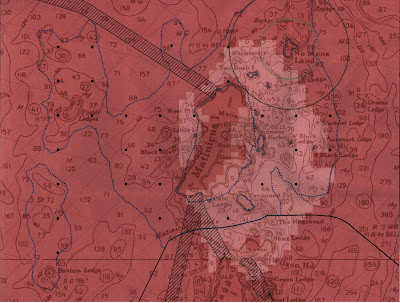 I finally found the wind map for Matinicus (and a little bit of Criehaven). The second image is the map legend. Double click on the images to make them larger.

Notice how the better wind is on the west side. The cross-hatched areas are the existing cable areas, as defined on the navigational charts, and are not anything new. Each of the dots is a proposed location for a wind turbine (Island Institute's proposed, not mine.) They are sited in the shallow water, which is marked by the blue dotted lines. I told Philip that such an intense wind turbine development (29) was highly unlikely to be accepted by the fishermen. Let me know your opinions.  Notice the two circles around No Man's Land, which would be setbacks for the bird sanctuary.

I am quite sure this wind farm will never be built. The plan was to have it connected to the mainland, as it would produce much more power than the islands could possibly consume.


In other news, I had an interesting conversation with Bill Staby of Resolute Marine Energy, Inc. (www.resolute-marine-energy.com). I met him last year at an energy conference, and he is developing energy-from-waves equipment. He claims that there is plenty of energy even in Maine waves, although not quite as much as the West coast. Putting wave energy collectors in the offshore floating turbine farms that have been proposed for offshore Maine has several advantages. Wave energy is not strongly correlated with wind energy. After a strong wind dies down, the waves continue for quite a while longer. There can be large waves with no wind - remember the huge waves after Hurricane Bill last summer. Wave energy is said to be much more predictable and reliable than wind energy.

The wave collectors would push the energy through the same underwater infrastructure as the wind turbines, so more effective use of the capital cost is possible.

The firm is working on two versions. One is a floating ball with three cables to the bottom. As the ball goes up and down with the waves, the cables reel in and out to capture the energy. In the event of a big  storm, the ball might be pulled underwater, close to the bottom, to avoid damage. This version would be for deep water.

A shallow water unit would be completely underwater, with at least ten feet of water above it at low tide. As waves go by, paddles capture the energy.

Bill hopes to have two small prototypes temporarily working in Penobscot Bay in the summer of 2011.

Comments and questions are always welcome.
Posted by Krem at 3:11 PM No comments:

Krem
Criehaven, ME, United States
Maine has always been home in my heart. Both sets of grandparents had houses in Camden; my father married the girl next door, literally. My parents, Peggy and Dick, bought the Hogstrom place on Criehaven in 1967. I have worked in nuclear irradiation, mining, laser opthalmology, just-in-time manufacturing, and jewelry. I earned an MBA from Harvard Business School, lived for seven years in Brazil, and traveled in over 60 counties and all continents. I like to think I have learned a bit from all the other parts of the world, but maybe not.